If you want to wear the pocket square but don’t know where to start, here’s the answer: the white pocket square. It dresses up any suit and is the traditional choice for a tuxedo.

As you can see below, it’s the choice of past and present style icons Sean Connery, Kanye West, and Humphrey Bogart as well as current influencers David Beckham, Daniel Craig/James Bond, and the Mad Men’s Roger Sterling and Don Draper. Don’t feel intimidated though, here’s what you need to know choosing a white pocket square. 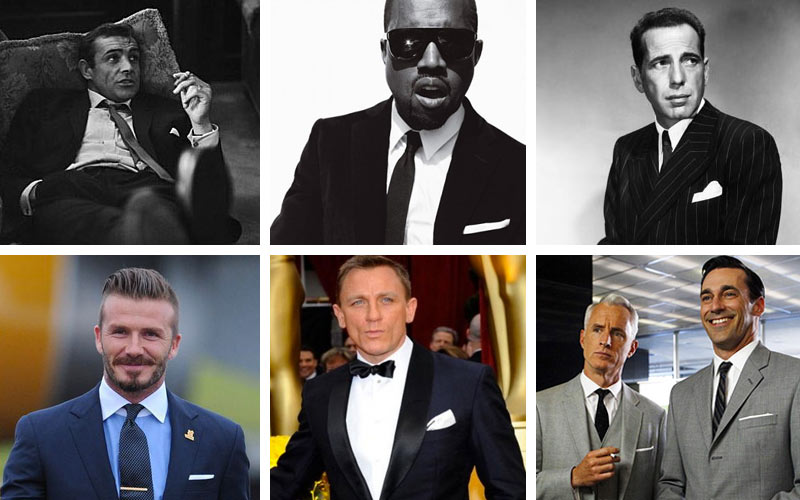 When buying a white pocket square, there is still a decision to make. They are commonly available in 3 fabrics – cotton, linen, and silk. There are differing opinions about which is the most appropriate in varying circumstances but no hard and fast rules.

Is it a handkerchief or a pocket square, some may ask. We say it’s fashion meets function. We saw Don Draper whip out his go-to white pocket square for his crying secretary and you never know when your opportunity to comfort a damsel in distress may arise. The inimitable Duke of Windsor wore cotton pocket squares when he could choose anything in the world. He added his own touch by wearing them unconventionally, tilted at odd angles.

While you can use a handkerchief, they tend to be lighter in weight and smaller than pocket squares, which can range from 10″ to 18″ square, depending on the brand and material.

A white linen pocket square in a TV fold is as classic as it gets. Whatever fold you choose, linen stay in place better than cotton. For the black tie look, white linen with a tuxedo the traditional choice, the silk also works.

Silk can be too shiny for business but is appropriate for evening and formal events. The texture of silk works best for puff folds while cotton and linen are most suitable for non-puff folds.

According to some, there are white pocket square rules but real style is about breaking the rules. It’s the final effect that matters so try out a few suit-tie-pocket square combinations and trust inner dandy to know what works and what doesn’t. If that doesn’t work, just ask yourself, what would Don Draper do?